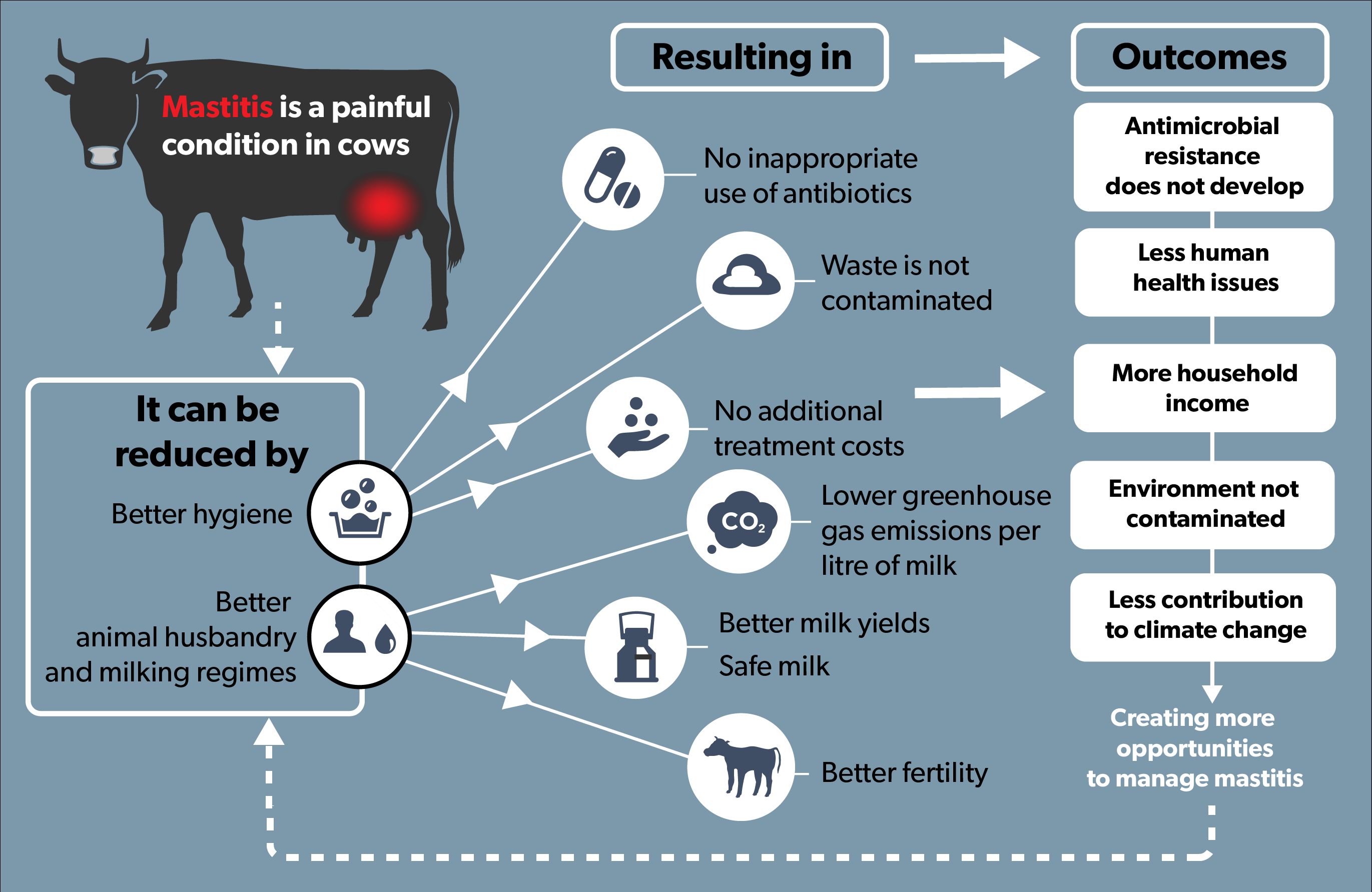 Animals that are well fed and watered, kept in clean and comfortable conditions, and that are handled well with opportunities to express important behaviours are less likely to die prematurely or show poor growth than less well cared for animals. They are more productive with more efficient use of resources such as time, labour and feed for livestock production bringing benefits including improved food security and greater income. Furthermore, avoiding stress before slaughter reduces contamination of meat with harmful bacteria and affects the quality, and value of the meat.

As consumers globally become increasingly concerned with animal welfare, livestock producers in low- and middle-income countries (LMICs) who can demonstrate well cared for stock may in some cases also be able to access new markets, further improving livelihoods.

Well cared for animals are more likely to remain disease-free and less likely to transmit diseases (zoonoses) to their handlers or people consuming animal-source foods. Diseases transmitted from animals make up 25% of the infectious disease burden in least developed countries.

Further, the promotion of healthier, well cared for animals is key in the fight against the excessive use of antimicrobials in livestock production, a practice directly linked to the development and spread of antimicrobial resistance (AMR), a major global health challenge.

Healthier, well cared for animals will attract greater value at market. Their added resilience to drought, disease and other shocks can prove critical for households and communities.

Environmental benefits include the smaller environmental footprint of efficient livestock production. Healthier, well fed animals are one of the most effective ways to reduce greenhouse gas emissions in herds.

In addition, poorly managed livestock production is linked to both poor animal welfare standards and environmental damage, including from water pollution, deforestation and increased emissions, as well as land degradation and wildlife habitat loss.

Some people say that animal welfare is a luxury only those in higher-income countries can afford.

Animal welfare has been linked to many of the UN Sustainable Development Goals (SDGs), in particular those addressing zero hunger, good health and wellbeing, climate change, clean water and biodiversity loss. The World Organisation for Animal Health (OIE) now has animal welfare strategies in place or in development for all inhabited continents.

Livestock can be a source of great cultural pride and social status, and interviews with livestock producers show time and again how they want to care the best they can for their stock. Insufficient knowledge and inadequate resources and infrastructure often stand in their way. Ways in which animal welfare in LMICs can be improved include:

Measures to improve livestock management at community level can include communication, education and incentive-led initiatives, as well as improved access to animal health services. Community action, including the use of community animal health workers, is often an effective route to better animal welfare.

Including animal welfare assessment within research and development projects can help to monitor impacts of intervention over a shorter timeframe and identify target areas or secondary issues early.

Welfare standards are being increasingly established in international trade standards and guidelines. However, a significant number of countries in Africa and Asia have no animal welfare legislation.

Livestock and the environment: what have we learned in the past decade?

Animal health and welfare for a sustainable livestock sector