How can dairy contribute to a resilient food system? On 12 November–adaptation and agriculture day at COP27–this was the question that the Netherlands East Africa Dairy Partnership put to its diverse panelists, who came from policy, academia and farming backgrounds.

Day 6 of COP also saw the the SNV-hosted session, 'Pastoralism and rangelands restoration: Promising solutions to benefit our planet and people'.

The question was posed within the context of local realities in low- and middle- income countries where food and nutrition security and local economic development objectives make climate adaptation seem more urgent than climate mitigation. 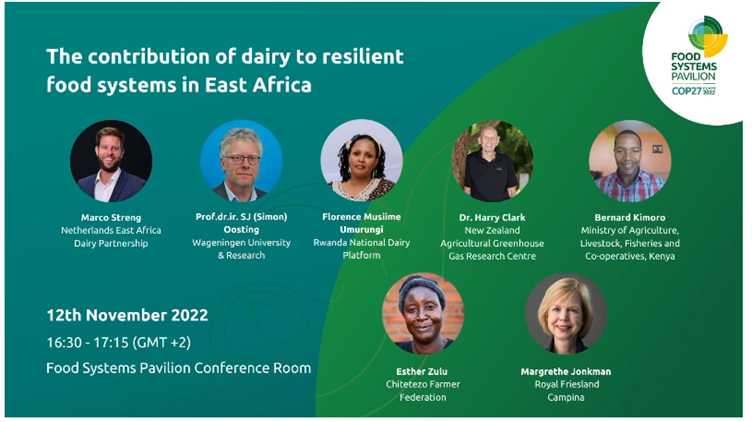 Harry Clark of the New Zealand Agricultural Greenhouse Gas Research Centre, outlined his organization’s joint dairy production research in Kenya with FAO. According to their models, baseline GHG emissions could potentially be reduced by 11–49% through enhanced productivity. But he emphasized that methods must be tailored to local farming systems, culture and the economic barriers that farmers face. ‘We need to obtain data for animals, assess what has worked in the past, and establish what will work in the future to help Kenya meet its ambitious GHG targets,’ Clark said.

Simon Oosting of Wageningen University and Research highlighted the multifunctional role of cattle in East Africa and proposed the novel perspective of looking at sustainable food systems, not individual animals. Referring to the three different cattle farming systems in the region–agro-pastoralism, mixed crop-livestock, and semi-specialised–Oosting talked about the varied uses of cattle in each system, the contributions of the farming systems to wider food systems, their relative impacts on sustainability objectives and the potential for improvements. All these dairy farming systems contribute to food systems, all need support to be sustainable, concluded Oosting. 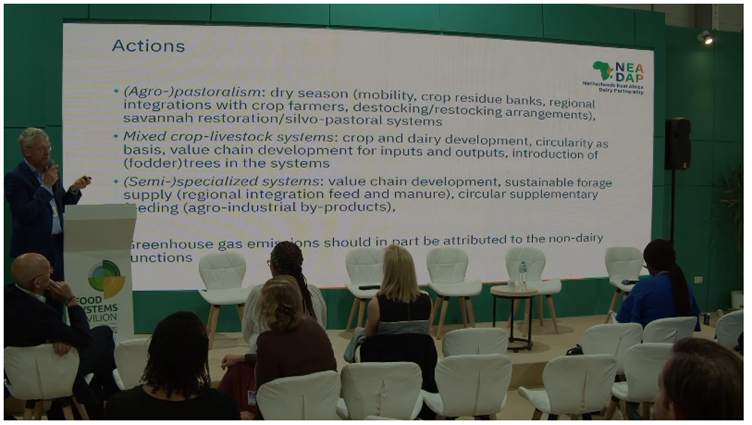 The two keynote speakers were followed by a panel discussion that included Margrethe Jonkman of Royal FrieslandCampina, and Esther Zulu of Chitetezo Farmer Federation. The moderator was Florence Musiime Umurungi of Rwanda National Dairy Platform, who opened the discussion saying that Rwanda has plans in place for farmers to reduce emissions by 2030.

She asked Jonkman, coming from the Netherlands, a country with considerable industrial dairy farming, what advice she could impart to the Global South. Jonkman said that the Netherlands and FrieslandCampina are supporting countries’ efforts to introduce sustainable practices in dairy, including in East Africa. Their work has found it is important to consider the full system of dairy production rather than target one element, and to take an integrated approach of assessment that includes nutrition and socioeconomic factors.

Esther Zulu, a mixed crop-livestock farmer, was asked how she performed farming while protecting the environment. She described how she uses livestock to support crop farming, such as using manure as fertilizer, and spoke of the importance of sharing farming knowledge with the community.

During the Q&A following the panel discussion, one audience member said, ‘It’s so exciting to see pastoralism being given this space at COP27 today.’ She said that the wellbeing of the pastoralist farmer should also be considered in any sustainability actions, adding that her own schooling all the way up to her PhD was made possible thanks to her mother selling livestock.

Day 6 of COP was designated as ‘Scale Climate Resilient Agriculture Day’ at the Food Systems’ pavilion during which was held the SNV-hosted session, Pastoralism and rangelands restoration: Promising solutions to benefit our planet and people.

In addition to the pastoralism experts invited from across the globe, the session included Robha Murha Abekari, a youth pastoralist representative whose attendance at COP27 was supported by CGIAR’s Livestock and Climate Initiative.

Three important themes emerged from the conversation, with panelists calling for:

‘Pastoralists are ahead of the curve in terms of climate resilience,’ said Maryam Niamir-Fuller, co-chair of the International Year of Rangelands and Pastoralists (IYRP) International Support Group, referring to the ability of pastoralists to adapt to the variability of drylands.

However, pastoralists are also disproportionately affected by the climate crisis. ‘They are paying the price for a crime they never committed,’ said Abekari, Lead of the Africa Youth Pastoralist Initiative, who herself comes from a pastoralist community in the Afar region, Ethiopia. She highlighted that climate change impacts are burdening pastoralist households, with women, children and individuals with disabilities suffering the most.

Dodo Boureima, president of the Network of Pastoralists Billital Maroobe, talked about the need for better data to demonstrate the full range of benefits generated by pastoralism. Current measurements are based primarily on the output of milk and meat. Boureima argued that, ‘pastoralism must be understood as a sub-sector that delivers ecoservices,’ he said. ‘Pastoralism’s contribution to conservation, biodiversity and carbon sequestration also needs to be accounted for to gain a full picture of its service to the environment.’

Representatives from the Governments of Kenya and Mongolia were also present. Narangaravuu Altangerel, Climate Change Officer at the Ministry of Environment and Tourism Mongolia, noted that rangelands encompass 70% of total land and contributes to 24% of the country’s GDP. For Kenya, rangelands are home for 76% of the country’s livestock and 60% of its wildlife, noted David Palla, Livestock Production and Climate Change Expert at the Ministry of Agriculture, Livestock and Fisheries Kenya.

The session concluded with recommendations for the short- and long-term future. Elisabeth Simelton, senior policy specialist on Agriculture and Food Security, emphasized the need to integrate forecasting and early warning systems into policy decisions and expand extension services to remote regions. For the long-term, a consortium of farmers and producers is needed to support value chain activities and the inclusion of indigenous knowledge in decision-making.

‘It’s time to go beyond words and empty promises,’ urged Abekari. ‘We hope this African COP brings commitment beyond paper to save our planet and people.’